Last weekend, I had the privilege of attending the Imagine No Religion Conference in Kamloops BC.  The keynote speaker was PZ Myers.  If you haven’t heard of him you should really check out his blog Pharyngula.  PZ is a evolutionary biologist and outspoken new (or should it be “gnu”?) atheist. On Friday night he gave a public lecture about Intelligent Design. There was a surprisingly large audience there.  The talk was made more interesting by a creationist-kook who showed up with a list of questions that supposedly challenge evolution to the audience.  PZ has talked about it here: http://scienceblogs.com/pharyngula/2011/05/reactions_from_kamloops.php The most powerful talk of the weekend was by Nate Phelps.  If you don’t know his story — his father his Fred Phelps of the Westboro Baptist Church fame.  They are the ones who do the anti-homosexual protests at soldier’s funerals, amongst many other distasteful things.  Nate ran away from that life at 18 and tells his story of abuse and de-conversion with poignant emotion.  His life’s journey led him to Canada and he is now part of CFI Calgary. The best part of the weekend was meeting god.  Mr and Mr Deity: 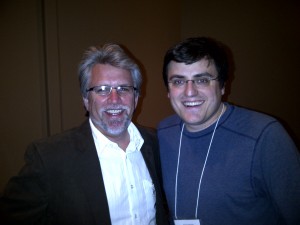 If you’ve never heard of Mr Deity‘s show you’re missing out on some of the best atheistical comedy around.  Truly inspired stuff!

Sorry, the comment form is closed at this time.