George Hrab will be in Edmonton on May 1 for an evening of music and skepticism! 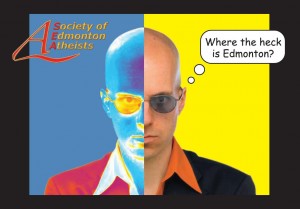 There are also two tickets available at $75 each for the road trip to Calgary and back to pick George up. We’ll be leaving the morning of the show. Tickets include admission to the show.

Who is George Hrab, you ask?

Multi-instrumentalist, singer, songwriter, producer, composer, and heliocentrist George Hrab has written and produced six independent CDs; published one book; recorded hundreds of episodes of an award winning podcast; and even performed for President Clinton— all in a personal quest to improve his audience’s cognitive skills by reaching them through their funny bones and dance shoes.

Exposure through his show has led George to travel around the world, performing his songs in a solo acoustic setting. Along with his superlative musicianship and clever songwriting, these intimate shows are known to showcase his quick wit and incendiary social commentary. He’s been a featured performer as well as Master of Ceremonies for James Randi’s The Amaz!ng Meeting—including TAMs in Las Vegas, London, and Australia—and as a special guest/performer in the Galapagos on the JREF’s Amaz!ng Adventure.

George toured both Australia and New Zealand as part of a fan-organized “Styrofoam Tour,” where he played to standing room crowds in Brisbane, Melbourne, Christchurch, Auckland, Adelaide and Canberra; and also performed in Sweden, Finland, Norway, and Ireland as part of his “Golden Ticket Tour.”

He was asked to write the theme song to the 365 Days of Astronomy podcast and premiered the song FAR at the 213th American Astronomical Society Meeting in Long Beach, California. His Occasional Songs for the Periodic Table, a 118-part song cycle featuring a song for each element of the periodic table, has been described as the first “true geek symphony.”

George’s range of skills include being the drummer and music director for the nationally recognized 70s soul tribute band, The Philadelphia Funk Authority; publishing a collection of essays called Non-Coloring Book; and even lecturing on diverse topics from jazz history to science—including a science track discussion about the non-radiometric evidence for the earth’s age at Atlanta’s Dragon*Con convention.

George is considered one of the preeminent skeptic/science/atheist/geek-culture music icons currently living in his apartment.