You have probably seen these signs around Edmonton churches:

Kerri went to find out, and let the rest of us know, what’s going on.

The signs are presumably a reference to my favorite bible quote, 1 Thessalonians 5:21:

“Question everything, hold fast that which is good”.

I’ve always wanted to cross stitch it and hang it proudly on my wall, mostly to see the reactions of relatives who also have crossed stitched bible passages on their walls. I went to their webpage http://questioneverythingab.ca/ And the first thing I saw was this: 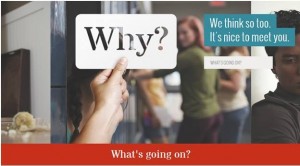 What’s going on is a 7-9 week course on Christianity called the Alpha course, which has been around for years, but is having a big campaign in Alberta this fall. It’s a series of video lectures, sometimes with a weekend getaway in the middle. There are 158 Alpha courses being offered in the Edmonton area this fall. I found one at a convenient time and location for me. The website said “contact the organizers or just show up”.

Preferring not to give my contact information to strangers with imaginary friends, I decided to just show up. The day of the course, I noticed that the address was in the middle of the Grant MacEwan campus. I went on Streetview and determined that there could not possibly be a church in that area. I googled the church’s name and determined it was actually located in Boyle. Too far to walk and not a great area to be wandering around in at night, so I decided to find a different course. I e-mailed the organizer to let him know they had the wrong address on the website. He replied to thank me, and said they also had the wrong date and time. The course I had been planning to go to was one of the later starting ones, so I e-mailed two of the other courses in my area to see if it was OK to join them even though I had missed the first couple of weeks.

The next day I had no response, so I decided to just show up. It was supposed to be at a Pentecostal Church. I walked down to the church at that address and discovered that the church I had been thinking of was Catholic, and empty. I wandered around that neighborhood searching for a Pentecostal church and decided that the whole campaign must be a scheme to help people discover Jesus by wandering around bad neighborhoods in the dark. After 30 minutes I gave up and went home. The next day I got two responses. The course I had been looking for wasn’t in a church, it was in the library of a senior’s center, and it was on Thursdays, not Wednesdays. The other one also had the wrong date and location.

I started to wonder if their primary means of communication for organizing this campaign was prayer.

That night I went to the senior’s center. The organizer had given me a phone number to call so they could let me in. (Again, so much for “just show up”). The phone number didn’t pick up, and the buzzer system and elevators for the facility were down, so I spent 15 minutes waiting outside. Finally someone let me in, and directed me to the library where two elderly ladies and the course facilitator were waiting. He started the video, which was a slightly annoying speaker on a stage in front of a large audience. He first gave his conversion story, explaining how in a time of crisis he picked up the bible and became transfixed and read it cover to cover over and over again. This was followed by some standard arguments for Christianity. After that, the facilitator shared his own conversion story (which was similar to the speaker’s) and asked if we had any questions.

If you would like to watch the videos from the comfort of your own home, they are available online here: http://uk-england.alpha.org/alpha/resources/archive/15

My main question at that point in time was how anyone could pick up the bible and become transfixed. I am a fairly patient person. The amount of time and effort I spent getting to one of these courses should tell you that. But reading pages of genealogies, followed by blueprints for building a temple and alter, followed by a cookbook for preparing offerings for a deity, followed by a census? Even I have never managed to make it past the census. But I did not feel comfortable “questioning everything” to the friendly but not terribly knowledgeable course facilitator in front of two little old ladies.

So I thanked him and went home.