During book club recently one of our members, Kerri, shared with us her ”best explaination for the empty tomb”….which doesn’t include resurrection being the answer.  So what did happen to the body of Jesus (assuming he existed in the first place) ?  Read her argument:

”I think every non-believer is tired of hearing about the historical evidence for the empty tomb. 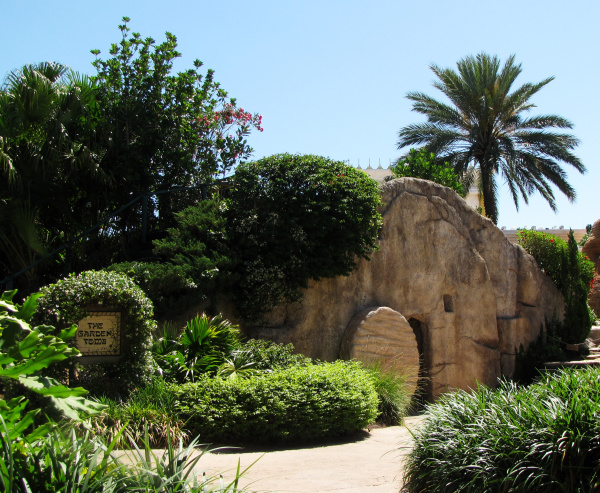 Model of the empty tomb from Jesusland – Six daily crucifixion re-enactments for the kids!

The argument goes that Roman and/or Jewish authorities could easily have quashed Christianity’s claims of the resurrection by bringing forward the dead body of Jesus. The fact that they didn’t do so implies that they did not have it. Anyone who did have the body would have great motivation to bring it forward to gain favour from the Roman Empire. If the Christian followers had taken it that would imply that they knew the resurrection was a sham and yet continued to martyr themselves for something they believed to be untrue. So where was the body?

They generally include the claim that we have better historical record of Jesus’s empty tomb than of any other event of that time. I’m not sure exactly what they mean by this, I can’t find any sense in which it is true. Furthermore, the only reason it even comes close to being true is because early Christians spent so much time destroying any documentation they felt might undermine or compete with their religion.

Now I don’t believe that the testimony of a few people recorded a long time after the event meets the threshold of evidence that I would require to believe in resurrection. But obviously the people bringing up this argument do. And arguing that their book may be insufficient in any way never goes anywhere.

So does the Bible give us any alternative explanations for where that body could have gone? Try this one:

Not only does this seem to be a solid alternative explanation for the evidence presented, but it follows logically from beliefs most Christians already hold. This causes them to actually listen to what you are saying and question their own beliefs. Which is a good start in actually getting somewhere.

Note: John 6 is one of the rare sections that Catholic and Orthodox denominations actually take more literally than their evangelical counterparts. Evangelicals are used to arguing with Catholics that Jesus did not mean that you literally had to eat his flesh and blood, therefore the Eucharist is symbolic not literal. However for our purposes, it does not matter what Jesus meant, all we require is that at least 1 of those 5000 witnesses, or the people that heard about it second hand, took him literally. And John records that many people were disgusted by the suggestion of cannibalism and left. This makes it difficult to deny that at least 1 person could have taken it literally.

Note 2: Try not to start with the simple answer to their question for shock value (“he was cannibalised”). The whole point is to break through the stereotype of disrespectful atheists who know nothing about their religion. The shock value you are looking for is the realisation that you actually know their book fairly well, and hopefully this will get you to a place where they actually listen and think about what you are saying. From a believer’s perspective there is no more effective argument than one from the Bible. That is why can’t seem to get out of the habit when talking to someone that doesn’t believe in the Bible.”