The University of Alberta Atheists and Agnostics (UAAA) and the University group Power To Change held a debate on Thursday January 23rd between Christian Apologist Michael Horner and Reasonable Doubts Podcaster Justin Schieber.  It was well run, with the UofA debate club moderating for us, and despite a few feedback/sound system issues everything ran very smoothly. 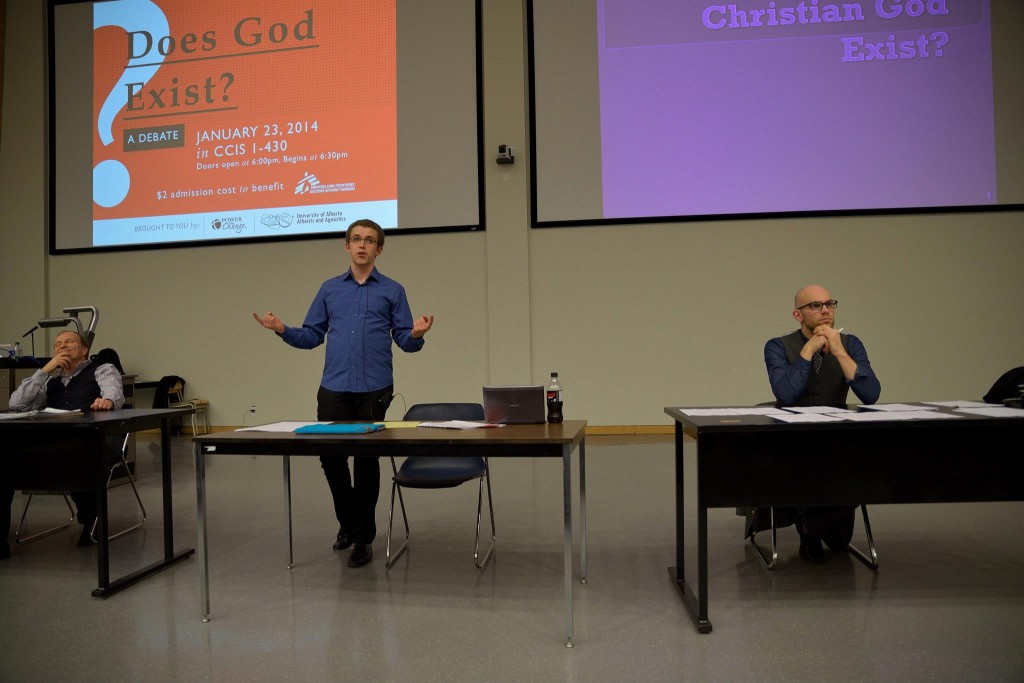 A standard model was used for the debate, with opening statements from each, two opportunities to rebut the other, a question cross examination and then final remarks.  We were only given 30 minutes for questions from the audience however, and this was the big downfall of the evening as only three questions per view were able to be addressed (with double that again who were turned away due to lack of time).

So let’s look at the arguments.

Michael Horner clearly knows William Lane Craig, and if I’m honest I didn’t even need to take notes.   His arguments and presentation were word for word what WLC uses, the only difference appeared to be that he used a purple background for his slideshow presentation.    If you are familiar with apologist arguments from the likes of Craig or Lee Strobel, then you too have heard them before.    Despite being asked to debate the existence of a specific Christian God, three out of four of Horner’s arguments were rooted in a Deist God.
1) Kalam Cosmological Argument
2) Fine-Tuning of the Universe Argument
3) Objective Moral Values Argument.
4) God is the best explanation for the historical facts about Jesus of Nazareth – namely the resurrection, however he included Jesus speaking for God and performing miracles as ”historical facts”
Unfortunately, Justin Schieber had to spend time refuting the first three claims (despite these being refuted over and over again in previous debates by numerous people) and left little time to get to the meat of the discussion, which is a belief in a specific God who demands of us certain things, in this case the Christian one.

Justin Schieber, refreshingly, brought some arguments to the table that were new to me.
1) Problem of Non-God objects (ie planets, universes, humans)
I really hope I understood this argument correctly, what I took away was the basic premise that if God is all powerful/all knowing  and perfect he should not have been able to create things that were less than perfect, which of course implies they too would have to be God like in nature.     ”Godworld” would be the best possible universe for a being of such power and perfection to have created, yet here we are in our substantially less perfect world filled with non-God type objects.
2) Divine Hiddenness
The mere existance of non-believers proves there is no God.   If a perfectly loving God existed, he would ensure all capable creatures would have a relationship with him.  There was a logic framework set up for this starting at the premise ”If a perfectly loving God existed and non-resistant non-believers existed then……”’    The second premise concludes that there ARE non-resistant non-believers, therefore the conclusion is a perfectly loving God must not exist.  I was interested to hear the rebuttal of this, hoping that Horner avoided the regular cop out of ”free will and the fall”
3) Epistemic Problem of Divine Lies
This argument was a bit more complicated and definitely discussed afterwards between quite a few of us.  Again, I hope I understood the argument and for me it was that because of the vast knowledge gap between God and Humans (how many times have you heard:  ”We can’t know what God’s plan is; His knowledge is beyond our understanding; or God works in mysterious ways”?) that we cannot and are not in any position to put probabilities on anything God does, nor can we even judge if he is lying or not.    (I could already guess what the rebuttal was going to be, and Horner did not disappoint.)

Rebuttals were standard answers, with the exception of a few zingers from Horner.   Let’s just say he invoked laughter a few times, and I’m not sure that was the intended goal.

The ”Godworld” argument was refuted by Michael Horner with the claim that this type of Godworld universe may not even be a physical universe at all.  We are left with the maximally best possible physical world, which is, and I assume Horner was insinuating, what we have with our actual Universe.  If God was perfect and would create the most perfect universe possible then our universe MUST be the best possible one in this worldview.     Well, here are the issues with that.  This universe sucks.  Justin picked up on this and replied pretty much the same way.   This also was brought up in refutation of the fine-tuning argument, that the universe is a pretty volatile place, not at all ”fine-tuned” for us.   It’s quite alarming to me that  in Horner’s view this was the BEST God could do.

Next up was the Divine Hiddeness argument, and for me I couldn’t help but let a laugh escape when Horner took the first premise apart.  Which one is more likely to be incorrect, that a perfectly loving God exists, or that non-resistant non-believers exist?  You guessed it, he chose non-resistant non-believers.  So for him it’s MORE likely that 5 billion people in the current population who are non-Christian (yes theists of other religions included here) are simply suppressing their knowledge of God, are resistant to knowing the Christian God and in some cases, and here was the kicker, are UNAWARE they are suppressing their knowledge of God and are unwittingly resistant (therefore left out of the kingdom of heaven).  And remember, that 5 billion is the number today, this does not include anyone that lived prior to the supposed coming of Christ (outta luck!) and anyone that has died from a different faith or had no faith in the last 2000 years.   That’s quite the head count doomed to an eternity separate from God.

Let’s move on to the Moral Argument which got tied up with the Divine Lies Argument.   I’ll also throw in some of the cross examination question period, because this was raised at that point too.
Horner insisted on a few things, firstly that it would be impossible for a perfect being (such as God must be) to actually lie in the first place, and second that God wills things that are good because He is perfectly good so could not command us to do things that are not.   I hope the Christians in the audience were paying attention to the questions Justin asked Michael and more importantly to the admittance that Michael would indeed kill our lovely moderator from the debate club if he was certain that the God he believes in appeared and told him to do so.   He fluffed around a bit after that, claiming God wouldn’t ever ask us to do something that went against our moral intuitions though, and at this point I had wished there was more time or audience participation.  Justin had previously mentioned that Gods actions are not consistent with the morals he gives us in the bible and managed to squeak in with a comment on the atrocities in the bible.  Cue another giggle from me when Horner defended God with the answer that genocide in the bible wasn’t ACTUALLY genocide, it was all hyperbole.  The analogy used was two sports teams having a game and one side runs away with it.  We might say they ”annihiliated” the other team, but of course that simply does not mean that anyone was killed.   At this point both parties were stopped and made to move on as they ran out of time.  I’d like to give one more rebuttal for this though, even though it didn’t come up in the debate.

For those who haven’t read their bible, there is the intriguing story of Abraham being asked by God to sacrifice his son Isaac as a burnt offering, this was a way to prove that Abraham ”feared God”.  Now don’t worry, God is all-knowing, so he already knew that he would send in an angel right at the last minute and save Isaac from death, but poor Abraham is not privvy to this information.  So here are the two issues that arise here, that refute Horners explanation of the Divine Lies argument.
– Firstly, God DID command for a human to do something that goes against not only the moral code God has given, but also the moral intuitions handed down
– Secondly, God lies.  Abraham is NOT required to give his son as a burnt offering at all, because God would have already been aware of Abraham’s loyality and fearfulness of God prior to ever commanding this of him.

We came to the question and answer period, and there were some questions about morality and the likes.  Then came the probability question, that when something actually happens the chance of it happening have then become 100% possible.  Horner set out to refute this with some strange ping pong ball analogy.  We have a large amount of ping pong balls, all white with the exception of one black one.  The white balls mean we can live, the black ball means death.  I imagined some sort of bingo spinner actually and I think that’s what he was going for.  At any rate, we get the black ping pong ball, so we have to die.  Horner argues that we would immediately assume that it was rigged/set up or intelligently designed for us to get that black ball, when there are so many white balls in there.   Um, what?

The evening concluded with a few drinks, food and chat at Dewey’s at the U of A and then we all set off home to ponder the conversations we’d all had.  I for one, thoroughly enjoyed my evening.   A big thank you to Michael Horner from Power To Change and Justin Schieber from the Reasonable Doubts podcast, as well as the University groups that worked hard to create the event.

AH!  I almost forgot!   As is tradition with the munk debates, we took a poll from three options based on how loudly we clapped.  The choices were ”there is no god”, ”there is a god” and ”I’m undecided”.   I’m sure you are all dying to know;  did anyone in the audience change their mind after this interesting and entertaining back and forth?  Well, the clap-o-meter poll certainly didn’t register it.