So, we all know that Christmas has it’s roots in other festivals, from solstice to saturnalia;  Easter traced to Ostara and spring equinox, but what about the other Christian holidays, such as Saint Valentine’s Day?

Today, couples everywhere are  heading out for romantic dinners, date nights, and exchanging expensive gifts with each other for Valentine’s Day.   Most people have been taught that this is a day to remember the Christian Saint by the name of Valentinus, who performed secret marriages during Roman Emporer Claudius II’s ban on marriages.   Valentinus was caught, and executed on February 14th 269 CE.   In 469CE Emperor Gelasius declared February 14th a holy day in honour of Valentinus,  replacing the already existing holiday to the Roman god Lupercus.   There are also stories of two other Christian priests being martyred (that were also called Valentinus), one story tells of the priest being jailed and falling in love with the jail keeper’s daughter, signing his love letters to her ”from your Valentinus”.

Yup, that’s right.   There were actually two already existing holidays at this time, one on February 14th which celebrated Juno Fructifier (aka Juno Februata), Queen of the Roman gods and goddesses, and another during February 13-15th when a feast was held to celebrate Lupercus (aka Faunus or Pan) called the Feast of Lupercalia .   Both festivals were to do with fertility rituals, ensuring fertility for the women for the upcoming year.  In one of the rituals a man would choose a name out of a box and then was paired with that woman for the rest of the festival (or the year).  In another,  women were encouraged to bare their backs to be spanked by men using a goat hide made into strips in order to promote fertility.

So are you up for the traditional ways to celebrate these festivals, being paired up with a stranger and then using whips?  Those pagans sure had some interesting party ideas! 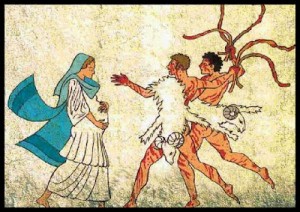