Last night myself and another member attended the presentation at Meadowlark Baptist Church featuring Ken Ham and Dr. David Menton (Ken’s brother Steve was also there) to listen to them discuss two topics. Ken presented ‘’Evolution, scoffers and the Last Days’’, while David Menton gave us a detailed view of skin and hair and their ‘’design’’ in his talk ‘’Beauty is skin deep’’.

I’ve often wondered why young earth vs old earth was such a big deal from a theistic viewpoint, surely the key point is salvation through accepting Jesus as your saviour, so chose to play the theistic evolutionist for the night to see if I could find my answer to that. I wasn’t there to be confrontational and was worried being labelled an atheist would shut down conversation. I regret misrepresenting myself now, honesty is important to me so I should have just been upfront, but anyway, let’s move on….. 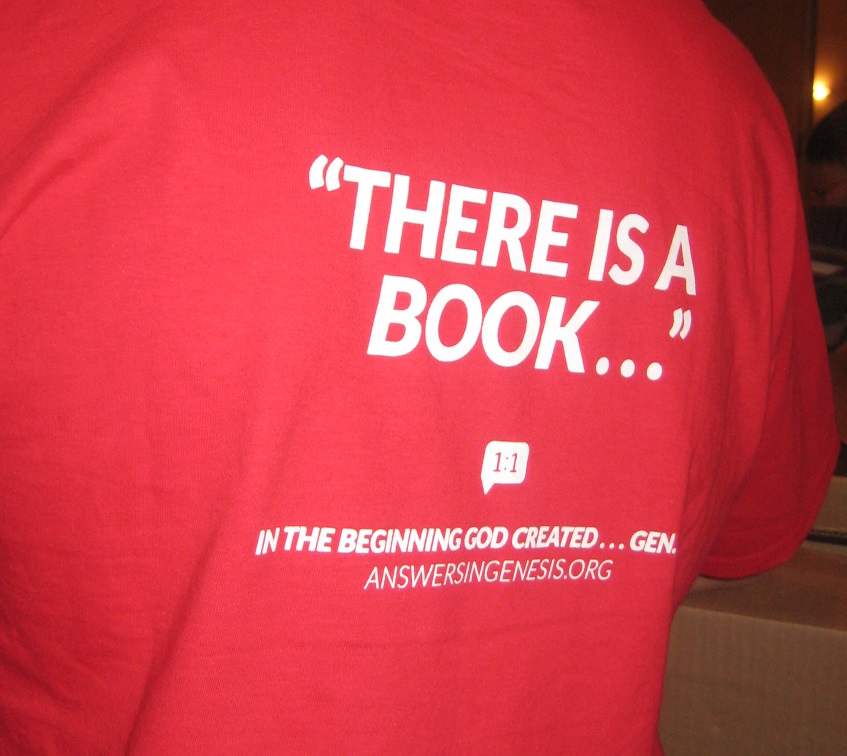 Ken Ham introduced a lot of the same information we’ve all seen during his debate with Bill Nye. He tried to squish a lot of info into his one hour talk so consequently was speaking extremely fast, so I hope I didn’t miss some of his points.

Ken is concerned if we don’t take the bible as literal history then we have no reason to take the bible as an authority of God’s word…and I can’t say I disagree with this point, many people accuse liberal Christians of cherry picking. He repeated numerous times that atheists/secularists are suppressing their knowledge of God and simply don’t want to believe in the word of God because we can’t admit we are sinners.

To disprove evolution, we were given examples of the soft tissue found in a dinosaur fossil (Mary Schweitzer) and how that contradicted evolutionary time frames, along with examples of the basalt with a tree inside it that dated to earlier than the basalt, problems with comets and the oort cloud, recession of the moon meaning that the moon and earth had to at one point touching (perhaps he doesn’t know that the moon came partly from the earth?) and with DNA being a language and information system that is so complex it’s only explanation is design.   Ken dealt with skin colours and racism (that we are all one race, the human race, and even his picture of Adam and Eve had dark skinned people), Noah’s ark and how it was possible to have all the animals on it, and that the bible is clear that death came after sin so evolution can’t be possible. Moving on he discussed geology and rock layers, giving examples of rocks created quickly and tried to show us where all the water from the flood receded to. He pointed to contradictions between the accepted scientific model of the end of the universe (big freeze or heat death) and the bible claim that everything will burn in fire, and then had some clips of Dawkins on Q&A  and in Ben Stein’s movie “”Expelled”.

He claims moral relativism is invading our world and secularists are teaching their ‘’religion’’ in public schools. Ken then called for people to make disciples by spreading the gospel.

During the intermission I decided to see what the lady sitting next to me had thought, and she was clearly excited by the discussion and felt he had done a wonderful job. I simply questioned her on why our DNA links us to all other living things, and she seemed taken aback. ‘’We don’t share any DNA with animals!’’.

It was clear to me, as I looked around the room during the presentation and noticed all the nodding heads, and after this brief back and forth with my neighbour, even as a pretend theist who accepts evolution, I was completely the odd man out (along with the other SEA member who was with me). The entire crowd of 400+ attendees besides us believed in a 6000 year old earth and creation without evolution. The entire crowd.

I don’t need to go into much detail about his talk, it was basically a high school biology lesson about the complexity of skin and hair that was meant to show how ‘’designed’’ we are. He didn’t say much that didn’t fall in line with either model (evolution or creation) and in some cases seemed to prove evolution over creation when he talked about all the tiny hairs all over our body and that skin formation seems to follow the laws of nature. His tenuous links to the bible were Psalm 139:13 stating that we are ‘’knitted together in the womb’’ (and skin appears to be woven)  and  Matthew 10:30 that  ‘’all the hairs on your head are numbered’’ (and we are born with all our hair already, we don’t create more or lose any). For me, there was nothing presented here to dissuade the evolutionists from their view, but maybe I missed the point?

The adjoining room held a series of books and dvds for sale, many authored by Ken Ham himself with a notable stand out of ‘’Evolution VS God’’ by Ray Comfort. The children’s books caught our eye, and although I do not have a picture of the letter O for original sin (which had a charming rendition of Adam and Eve in the Garden of Eden with a dead lamb bleeding out in the background) I did get a picture of Y for years: 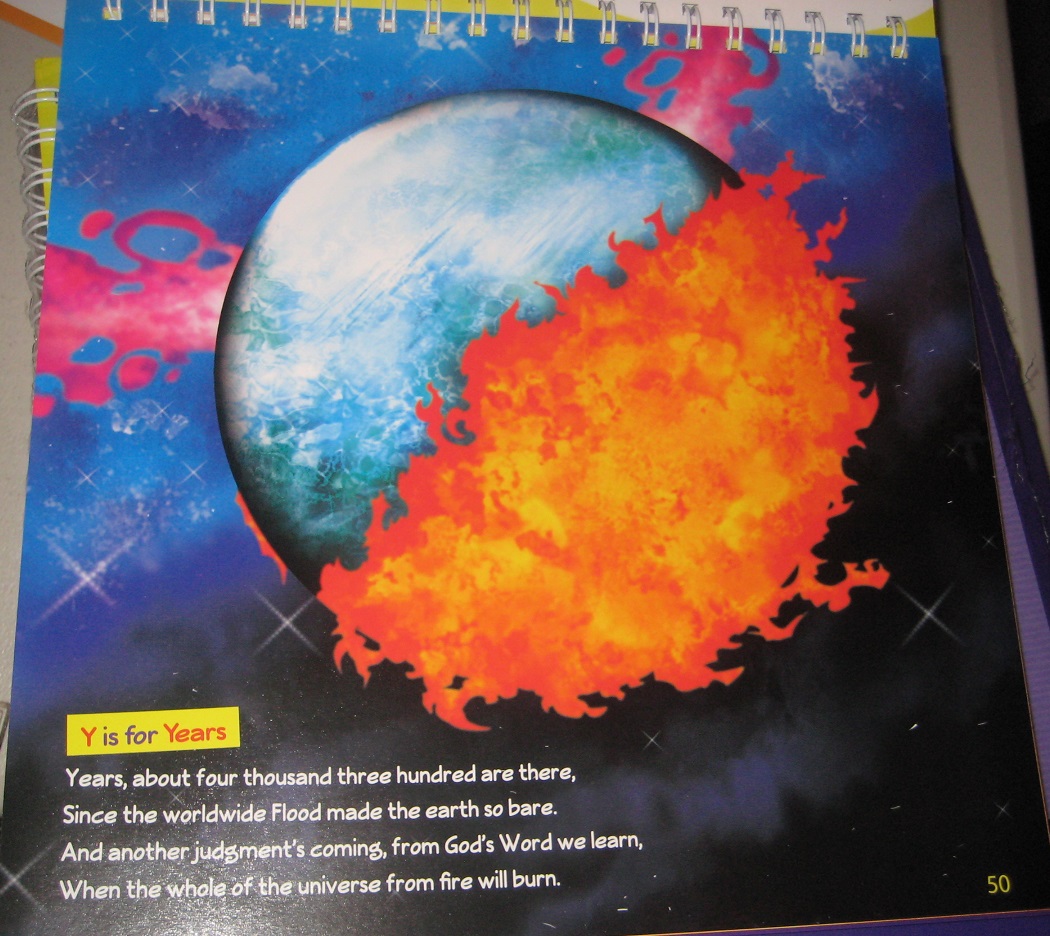 Dr. Menton and Steve Ham were more than happy to answer our questions and Steve even insisted on giving us each a free book, and we quizzed them on things like how can it be heaven if our loved ones can’t go, why is there such a problem with primates being classified as the same ‘’kind’’ as humans, why does Satan still try to deceive us if he knows God will always win, and why don’t we find modern day mammals in the fossil record alongside the dinosaurs. From their point of view they answered them perfectly (eg: dating of dino fossils is wrong, so of course we have modern animal fossils of the same age) and from our point of view they didn’t answer them at all, but that was to be expected.   However, even with different conclusions to the same evidence, Dr. Menton came across as very knowledgable, educated and respectable.

I did come away with a surprising lesson. These people TRULY do believe they have evidence for their view of the world, these are not scam artists or con-men. They are genuine people who care about humanity, albeit from a different angle than we do. I learned that going forward, to have proper discussions with believers, I will have to change my questions and approach.