We’ve had lots of people asking why we went to this event to stand outside with our homemade signs…even other atheists are questioning our motives here.  So, I wanted to make it clear why we went and what exactly the signs and information we gave out said.

Firstly, psychic mediumship is big business.    We’re taking $100’s of dollars per session that might last an hour, and then you often are asked to return to have a curse removed or past sins cleansed.  Unfortunately, what should be seen as mere entertainment has been known to eat into life savings and in extreme cases nearly cost the person their house.   One can see how it would be easy to fall victim to these mediums, hoping to speak to your loved one from beyond the grave, especially if you have just had someone in your life pass on.  Bear in mind though,  there is no current evidence to support an afterlife, and no evidence to show that someone could connect with one if there was.   James Randi offers a million dollar prize to anyone that can ”demonstrate any psychic, supernatural, or paranormal ability under satisfactory observation.”   This prize has been available, albeit in a smaller amount to start with, since 1964, and there have been multiple people try to win, but it still remains unclaimed.

So, no evidence of an afterlife, no evidence anyone can speak to the dead, yet psychic mediums pull in viewers for their tv shows and to events such as these in droves.   They prey on people when they are at their most vulnerable, after losing a loved one, and charge them a hefty fee to find a small comfort that they could have figured out on their own.  If you are a believer in an afterlife, of course that someone who was a father figure to you (oh that must mean Grandpa John) loves you and is happy where he is now.  The question is, did you really need to pay a medium to know that?
Many of these self proclaimed psychics have been called out for their bad readings by past customers, Teresa Caputo included.  Inside Edition did an expose on her from her live shows (rather than the edited tv versions), and noted that she struck out time and again.   It’s interesting to know that a media ban was put on her show here in Edmonton (according to the Sun interviewer I spoke to earlier today) so that there would be no reviews or articles about her show afterwards.

So what did our signs say?   They were pretty benign to be honest,  generally speaking they were to encourage people to think.  And our one page handout did the same.  It didn’t tell people what to believe, but rather was a guide to spotting a genuine psychic, with information on cold reading, encouraged them to count the misses to compare to the hits (most people only remember the hits) and to understand that information was easily available to the medium prior to the show, from prayer cards/information cards and even just ticket sales.    Within about 10 minutes we were asked to leave Rexall property and stand across the street as apparently even the sidewalk on that side belongs to them (something we’ll be trying to confirm for future reference).  Oddly, this may have worked out in our favour as now we were at the traffic lights and people had to stop and wait for their turn to cross, giving us more time to ask if they would like our information on ”how to spot a genuine psychic”.   We had plenty of responses from rolled eyes, whispers, laughter all the way to ”I’m only here to see her shoes”….either way, I hope we helped a few people question a bit more, or at least view it as entertainment only.

Which of course, is all it is. 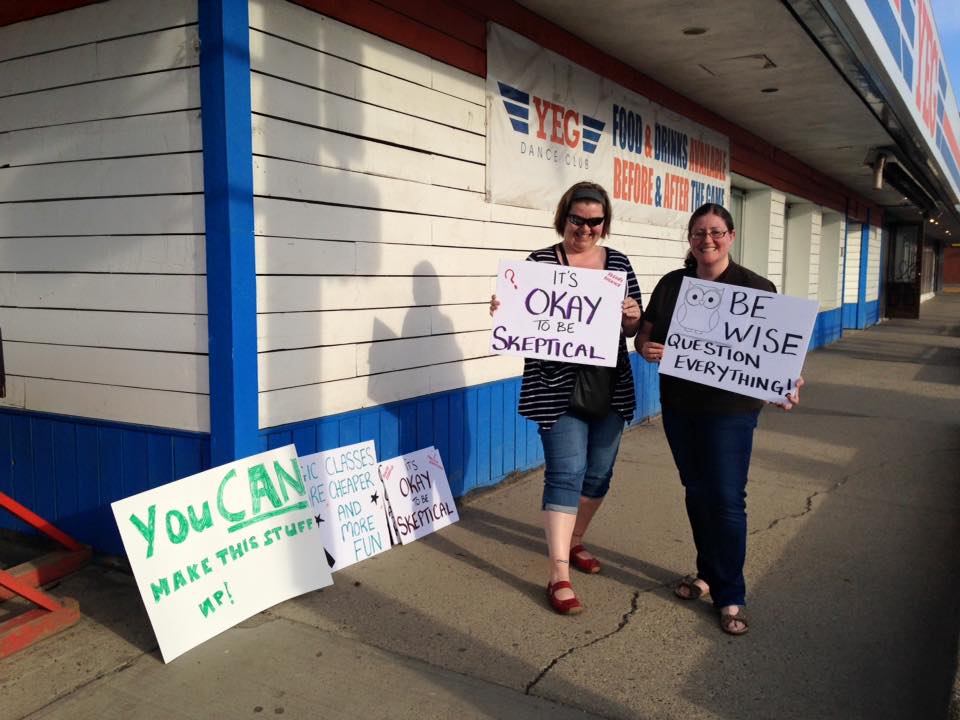