In the spring of 2015 my son was enrolled at Sir George Simpson school in St. Albert, and we had an email message sent to all parents about sex education classes that would be offered.   At the time, I was already aware of the issues with the Pregnancy Care Centre providing abstinence-only based sex ed classes, due to the stories out of Edmonton, where they were banned from presenting.  I immediately contacted the Principal of the school to express my concerns and to withdraw my consent from my son participating. I made it quite clear that I was not withdrawing consent because I was not willing to allow him a proper sex education, but rather that this was NOT a proper sex education and that instead I would be teaching him at home.

Generously, the Principal allowed me to sit in on two of the sessions presented and allowed me to give him feedback afterwards.  I sat in on the Grade 8 girls and Grade 7 boys classes.     A few brief excerpts from my notes:

There were some factually incorrect things that came out ….”herpes, you may end up with that for life” ,  ”people with HIV live much shorter lives” and that ”porn addiction changes your brain the same way a drug or alcohol addiction would” .    I didn’t appreciate the scare tactics used when discussing abortion, which was only explained as a surgical procedure…physical removal of the foetus.   The fact that medical abortions (pills) can be performed up to about 9 weeks was completely ignored.     Then, when a young girl asked ”If I have an abortion will I be able to have children in the future?” the answer given was  ”surgical abortions have risks that can leave you unable to have children in the future”.    I felt this was a disingenuous answer, and sexual health providers are there to offer facts not to offer opinions.   Factually, abortions have very low risk when done in safe environments and are actually safer statistically than giving birth or miscarriage, and almost all women go on to have children in the future.

We ended up moving to Edmonton the next year and I heard through the grapevine that this program wasn’t going to be used anymore (turns out it was just the Grade 9 program that was removed) and then again this year the issue came up again.   Numerous new parents complained, and I emailed the Superintendent of St. Albert Public with my notes from my sessions in 2015.  Today, the newsletter for Sir George Simpson went home for March, and it appears they are finally doing the right thing and ceasing to use the WAIT program in their school, and from the sounds of things, the entire district.  I applaud that the correct decision was finally made for our children, I’m just sorry it took so long. 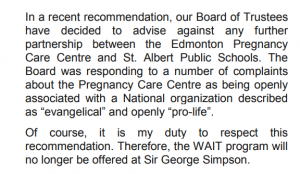