Just in case you were wondering, we’ve had multiple sightings of the bus ads, mostly downtown. There has been some media attention over the last week. 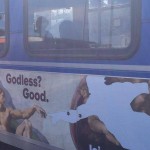 The Society of Edmonton Atheists are spreading their message, 630 CHED & iNews 880

If you haven’t heard of Luke’s (@According2Luke) latest activity on Twitter, you should take a look at the  collection of his “favourite” comments regarding our bus ads. #SEAbusad

In case you missed it this morning, one of our Directors, Luke Fevin, was on the radio with Ryan Jespersen of 630 CHED at 9am. You can still listen to their great conversation! Luke is the first guest, and there are more listener comments at the 27 min mark after Luke is gone.

The location for our Roundtable meeting on February 3 has been changed. Please help spread the word!

We plan to be back at our usual location for March.

dmonton Public Library (EPL) was named the 2014 Library of the Year. And it is a pretty awesome organization. The SEA has been holding our monthly Roundtable meetings at the downtown branch since 2009.

You may have looked through the catalogue or shelves at one point and thought that there wasn’t much relating to atheism or leaving religion. Donald, a local atheist and library fan, has been using his monthly allotment of book requests to stock up the shelves with atheist/secular books that he’s interested in.

If you want to see more of these types of books* on Edmonton shelves, there are two easy things you can do to help that happen: END_OF_DOCUMENT_TOKEN_TO_BE_REPLACED

We’ve put together a list of Alberta atheist, agnostic, secular, and freethought groups. If you’re looking for one (or another one) in your area, there’s a growing selection.

It’s December. Christmas decorations in stores have been up for 8 weeks already, you may be wishing you could target an EMP at speakers playing carols, and the annual charity season is in full swing. Salvation Army kettles are in the malls, and there are billboards up explaining that a goat is more than just a goat.

So, how do you decide which charities are worth giving to? END_OF_DOCUMENT_TOKEN_TO_BE_REPLACED

Diversity (gender and racial) in speakers at atheist conferences has increased from 2003 to 2014, according to a paper written by Ian Bushfield and Chris Hassall.

This is good to hear, and certainly follows my own impressions of the growth in the SEA’s membership. Back when we were getting organized in 2007 (which Ian had a large hand in) the group was overwhelmingly white males. Now, our Board of Directors is evenly split in terms of gender, and our racial diversity at events has been improving.

The SEA is working with some other Alberta groups for a conference in October 2015, keep your eyes open for details in the coming months.

Former Alberta Education Minister, David King, has put together a summary of why Alberta has a separate school system (both public and Catholic school districts) and whether the system can be changed. (Hint: yes, and other provinces have done it already.)

Separate school education, Alberta, and the constitution in 2015

Does your school suffer from an STD (Standard Teaching of Dogma)? SEA member Kathy Dawson has put together some tips and resources for dealing with religious-based sexual education in your public school.

If you aren’t familiar with Kathy’s current human rights complaint against the Edmonton Public School District, Paula Simons from the Edmonton Journal wrote a column about the topic in July. Edmonton’s Pregnancy Care Centre is explicitly Christ-based, and an affiliate of the Canadian Association of Pregnancy Support Services, whose Core Documents can be found on their website.