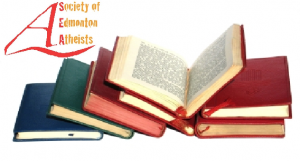 The Society of Edmonton Atheists (SEA) Book Club is entering its fourth month. To date we have dispatched: Richard Dawkins’ The God Delusion, Carl Sagan’s The Demon-haunted World and Christopher Hitchens’ God is not Great. We are currently raking over Daniel Dennett’s Breaking the Spell.

As we hit upon a strategy of covering the classics of New Atheism’s four horsemen – Sam Harris’s The End of Faith is next up.

(An awareness of the New Atheist literary phenom as a socio-historic product is emerging. Exactly where this trail leads no one knows.)

Harris’s opus will be followed by: Infidel by Ayaan Hirsi Ali and A Universe from Nothing by the fifth horsemen, Lawrence Krauss.

(Books are chosen by an ad hoc consensus process.)

The format to date has been to divide the books into halves. The SEA Book Club then meets every second Sunday to discuss each half of the text. Deploying this method we conquer one tome per month.

Working through a book collectively and publically is far superior to skimming a book in private. SEA Book Club members benefit from each other’s perspectives and knowledge. The discussion involves a chapter by chapter review which is a valuable aid to memory. Differences of opinion emerge during the discussions and the friction generates as much light as heat.

A longer term perspective is useful. If the SEA Book Club holds to its present course then within a year of so we will have imbibed all the “must reads” of contemporary atheism.

The goal is not to become au courant atheist snobs (although this is a likely by-product). The goal is to keep abreast the latest, most effective atheist thinking. The goal is to complete the mandatory reading list which constitutes the price of admission into the arenas where atheists grapple for leadership. An unavoidable and well-grounded rule in such venues has always been: “those who do not study, neither shall they speak.”

A person’s joining of the Society of Edmonton Atheists is a physical declaration that they are no longer willing to be an isolate. Becoming a public atheist implies a commitment to an activist cause. While this activism may take many forms, discussion with, and persuasion of, members and non-members will be an omnipresent component. Joining the SEA Book Club manifests a further commitment to “fill one’s boots” so that when engaging in the debates of the modern atheist melee one occupies the vantage point of the well-informed.

The mother-ship is leaving. Don’t be left behind.

This month our book is The God Delusion by Richard Dawkins. We will be discussing Chapters 6 – 10 for this event.

From the first SEA book club meeting on January 20, here are the summary notes for those of you who couldn’t make it along.

Discussion points: Should scientists still refer to ‘’God’’ when they don’t actually mean God as the religious know it? What would you say instead? END_OF_DOCUMENT_TOKEN_TO_BE_REPLACED